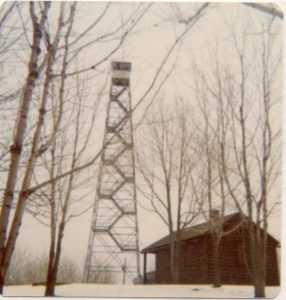 To listen to an informative and entertaining podcast on Fire Towers and this fire tower project, Check out this great Kaatscast podcast featuring Brett Barry doing an on-trail interview with FOBMFT board member Laurie Rankin. Besides talking about our project and its origins, Laurie gives a short history of New York State fire towers. Laurie is the daughter of Larry Bake who was the observer at the Balsam Lake Fire Tower, and her deep, personal  knowledge of fire towers makes this podcast extremely compelling.

Not to be missed!  Listen here.

Recently, Tom Clark, the son of the farmer who had originally purchased the tower contacted the Catskill Mountain Club and offered to donate the tower if the Club would be able to return the historical fire tower to its original location. Mr. Clark had been approached in the past about selling the tower to a company who would move it out of the area, but he remained hopeful that it could be returned to Bramley Mountain one day.

The Catskill Mountain Club initially approached the DEP about the possibility of restoring the tower to the Bramley summit. The CMC asked whether there was a reasonable possibility that the DEP would allow this, and if so, the Club would find out more about the condition of the tower now, 50 years later, and what it would take to put the tower back up. DEP’S Paul Lenz gave the CMC the answer that it was definitely possible.

The CMC then engaged Dave Vana, of Davanna LLC, the foremost fire tower restoration expert in the Eastern United States (Mr. Vana was recently engaged by the NYSDEC to help construct the Fire Tower for the Catskill Visitor Center) to examine the tower components stored in the building on the Clark farm and to determine whether the tower was in good enough shape to undertake the project. On October 16th, two members of the CMC accompanied Mr. Vana and the NY State Chapter Director of the Forest Fire Lookout Association to see the tower and the summit site. Mr. Vana determined that the tower components are in excellent condition.

The Catskill Mountain Club initiated the formation of Friends of Bramley Mountain Fire Tower as an organization dedicated to the Fire Tower Project. FOBMFT is comprised of membership from the Club and the local hiker and business community that will live on long after the tower has been returned to Bramley Mountain.

We are working hard to make the project a reality! 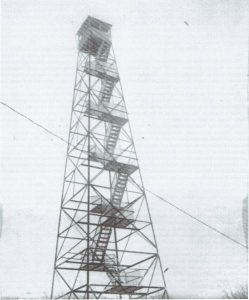